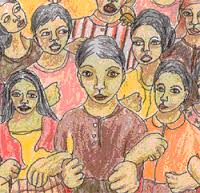 Fighting Back with Social Movement Unionism:
A Handbook for APL Activists

This primer is meant to inform APL members and leaders about the Center’s analyses, principles, aims, and internal organization. It is composed of five major sections.

In the first section, APL’s analysis of the situation of workers worldwide is presented. It explains why APL is strongly opposed to neo-liberal globalization which it sees as a phenomenon that is aggravating the problems of workers across the globe.

The second section contains APL’s reading of the Philippine labor situation. It highlights the facts and figures on the problems of Filipino workers brought about by national and international events and policies. It clusters these problems into economic, political and cultural.

In the third section, APL shows the strengths and weaknesses of the Philippine trade union movement.

While the fourth section clarifies the APL’s understanding of what unionism is and what it should be. It explains the concepts and rationale of social movement unionism, the Center’s main organizational strategy.

Finally, in the fifth section, the APL’s internal organization is presented.

This primer is not just meant to inform but also to encourage. More than ever, there is now a great need for unions to rethink conventional ways of organizing and mobilizing the Filipino working people.

This primer’s objective is to review and build upon what the historic trade union struggle has taught us, and to encourage all unionists, especially APL members, to utilize such learnings to redefine, reinvent and re-energize the workers’ struggle under the fast changing global, national and local situation.