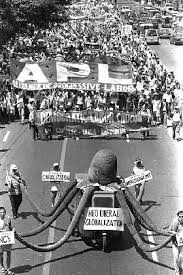 For 100 years now, the Philippine trade union movement has been steadfast in its struggle for workers’ rights and welfare, and has significantly contributed to the shaping of political discourse in society. While the struggle of the Filipino working class continue to advance to new heights, it has yet to alter the structures that promote the inequitable distribution of wealth and power.

Now, the trade union movement finds itself under a state of siege. With the onslaught of neo-liberal policies, the gains and the credibility of the movement, in being undermined. Though various forms of workers’ organizations have sprung in defense of particular sections of the working people, the movement, ironically, remain fragmented and weak.

Amidst all these, a new generation of leaders from various workers’ organizations around the country, driven by the desire to reverse the movement’s downslide, began an earnest search for better organizational expressions and strategies that will effectively advance the interest of the working people in a rapidly changing world.

They immediately recognized the need to break the barriers among blue collar and white collar workers – in the formal and informal, and public and private sectors – and organize it into a labor center as both a symbol and a means to catalyze greater solidarity.

It was in this context that the Alliance of Progressive Labor was born in 1996.

The Alliance of Progressive Labor (APL) is a “national labor center”. Consistent with its belief in social movement unionism, APL has built itself as a “multi-form center”, drawing into its fold various forms of labor organizations and not just trade unions. In the future, APL sees itself as a singular union structure consolidated along industry and geographical lines.

APL was formally organized on November 1996 through a National Founding Congress.

It is committed to the advancement of Social movement unionism – a strategy directed at recognizing, organizing and mobilizing all types of workers and unions for engagements in different arenas of struggle. This strategy is not limited to “trade union” organizing and has been developed precisely to respond to new work arrangements where employee-employer relationships do not exist or are not clear.

Social movement unionism, then, seeks to protect the rights of all workers, not just the wage-earners. It is “social” because it does not deal only with economic rights and political rights that trade unions usually deal with. Rather, social movement unionism seeks to address even the “social costs” of oppressive economic and political systems. It recognizes the broadness of workers’ interests and the diversity and complexity of work arrangements. As such, it is geared toward the struggle for workers’ rights in all aspects — economic, political and socio-cultural — and at all levels — local, national, global. In short, the strategic objective of social movement unionism is nothing less than social transformation.

What is Our Vision?

A just, self-managing and peaceful Philippines, where the working people is empowered, democratic practices are upheld in the economic, political and cultural spheres of life, gender equality is recognized and equitable distribution of sustainable development is guaranteed.

What is Our Mission?

To organize the working people into various forms of organizations. To merge these organizations along industry, sectoral and geographic lines.

2 thoughts on “About APL”