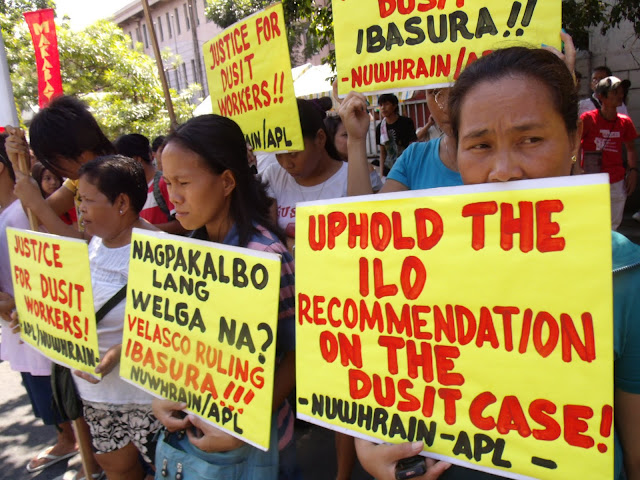 MEMBERS of different labor and church organizations trooped to the Supreme Court today to reiterate the call for the en banc review and reversal of the highly contentious ruling of its Second Division on the Dusit Hotel case, which was rebuked late last year by the International Labor Organization.

Penned on Nov. 11, 2008 by Associate Justice Presbitero Velasco Jr., the decision asserted that when the Dusit male workers went to work with shaven heads as a form of protest to the management’s blatant dilatory tactics in the collective bargaining talks, they were deemed guilty of staging an “illegal strike.”

Described even by the country’s rival workers’ groups as “highly anomalous and absurd” and a “very dangerous precedent and threat to labor and trade union rights,” the Velasco ruling thus upheld the earlier dismissal of 90 Dusit workers, including 29 union officers that virtually decimated the union leadership, and suspension of 136 others, among them women and other male employees who did not cut their hairs but were union members.

‘Martial law in the labor front’

Taking place during the month of the 39th anniversary of the declaration of martial law in the Philippines, the march-picket from Plaza Salamanca in Taft Ave. to the Supreme Court was also part of a series of campaigns of the broad-based Koalisyon Kontra Kontraktwalisasyon (Kontra) and the Church-Labor Conference (CLC) to highlight the continuing “martial rule in the labor front.”

“The plights of the ‘union-busted’ Dusit employees, the ‘outsourced’ PALEA (Philippine Airlines Employees Association) members, the ‘union/association-deprived’ Hanjin workers, the ‘perpetually casual’ SM salesladies, the ‘forever contractual’ call center/BPO agents, the unresolved killings of trade union activists, and the fast growing ranks of cheaper and docile non-regular and non-unionized workforce are testaments not only to the worsening neoliberal policies but also a confirmation that Marcos’ labor practices are still well-entrenched,” Kontra declared.

This was seconded by the Alliance of Progressive Labor (APL), a Kontra and CLC member, by explaining that “the character of the Marcos-era Labor Code and its litigious labor and industrial relations, aside from the still deeply-rooted corruption in government bureaucracy, including the courts, still exist.”

APL argued that “the Labor Code was designed not so much to provide Filipino workers with fundamental rights but to circumscribe them,” adding that “it remains basically the same despite all the omnibus and piecemeal amendments and ‘revisions’ that were passed since the fall of the Marcos dictatorship in 1986.”

“What happened was obviously a brazen act to bust the union and to prevent the forging of a new and better CBA, hence a clear violation of the workers’ democratic and constitutional rights to organize and to collectively bargain,” Reynaldo Rasing, Nuwhrain-Dusit Hotel Nikko Chapter (NDHNC) president, said.

Rasing also stressed that there was no strike or actual and deliberate work stoppage as starting January 2002 the workers were in fact prevented by management from reporting for work, which forced them to instead hold a picket outside the hotel.

Holding peaceful and concerted mass actions, even shaving one’s head, are likewise legitimate articulations of freedom of speech or expression, and which were further prompted by the protracted CBA negotiations that began as early as October 2000, Rasing disclosed.

Other labor groups branded the Velasco ruling as a form of “judicial legislation,” when the high court apparently assumed or “usurped” the law-making powers of the government’s legislative branch by declaring a new meaning of “strike” or an illegal strike at that.

‘Diplomatic reproach’ from the ILO

After several months of deliberations, the Geneva-based Committee on Freedom of Association of the ILO – prodded by cases filed by trade unions in the Philippines and abroad – released its “Findings and Recommendations” on the Dusit case in November last year.

Although couched in polite or diplomatic words, the committee papers were in effect a scolding of the widely assailed Velasco verdict, reported the NDHNC, whose mother federation also belongs to Kontra and the CLC.

Some of the major issues pointed by the committee are: